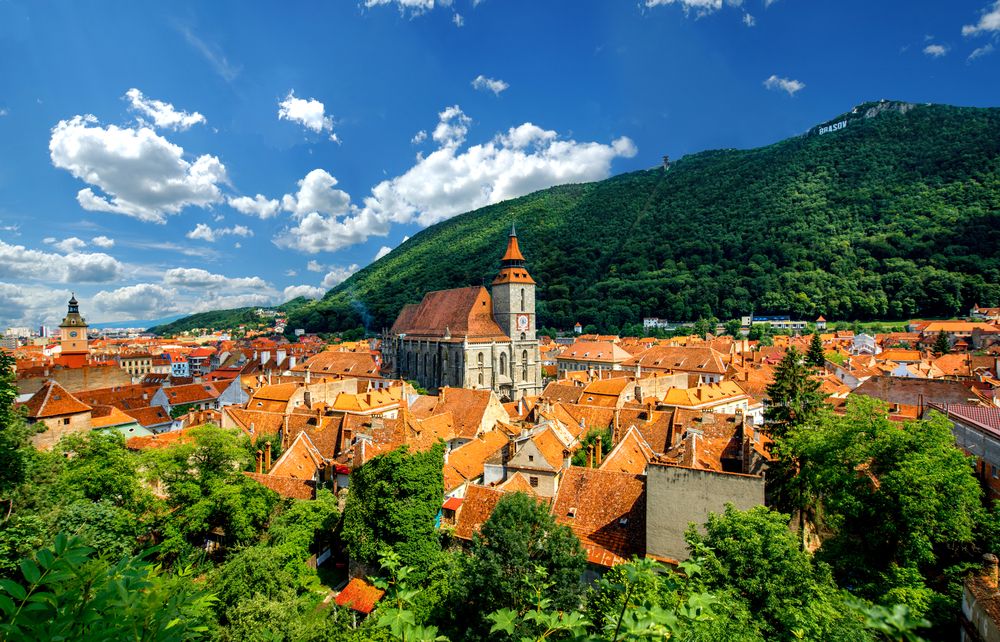 What to see in Brasov: a medieval town in the heart of Transylvania

Brasov is a picturesque medieval town located in the heart of Transylvania, about 180 kilometers from Bucharest and immersed in the beautiful landscapes of the Carpathian Mountains, where culture and history are perfectly combined. The city is an ancient trading colony called Corona, founded in the thirteenth century by a group of Teutonic knights on behalf of the then king of Hungary and later fortified by the Saxons.

The picturesque city of Brasov

Brasov is the biggest city in Transylvania, and the first thing you’ll notice when you arrive by car is the fancy Hollywood-style “Brasov” sign on top of Mount Tampa. Its historic center has remained virtually untouched by the passage of time, as have the surrounding walls. The new and modern part of the city developed outside the walls. It is characterized by a large number of visitors and several interesting sights worth visiting.

What to see in Brasov

You can start your visit with its most precious jewel, a stroll through its historic center, a multitude of cobbled streets and alleys surrounded by historic buildings with Baroque facades and Gothic spires. Most of the houses in the old town, as well as some churches and the defensive walls surrounding it, about 12 meters high and 3 kilometers long, were built by the Saxons when they established their trading colony here, at the time called Kronstadt. 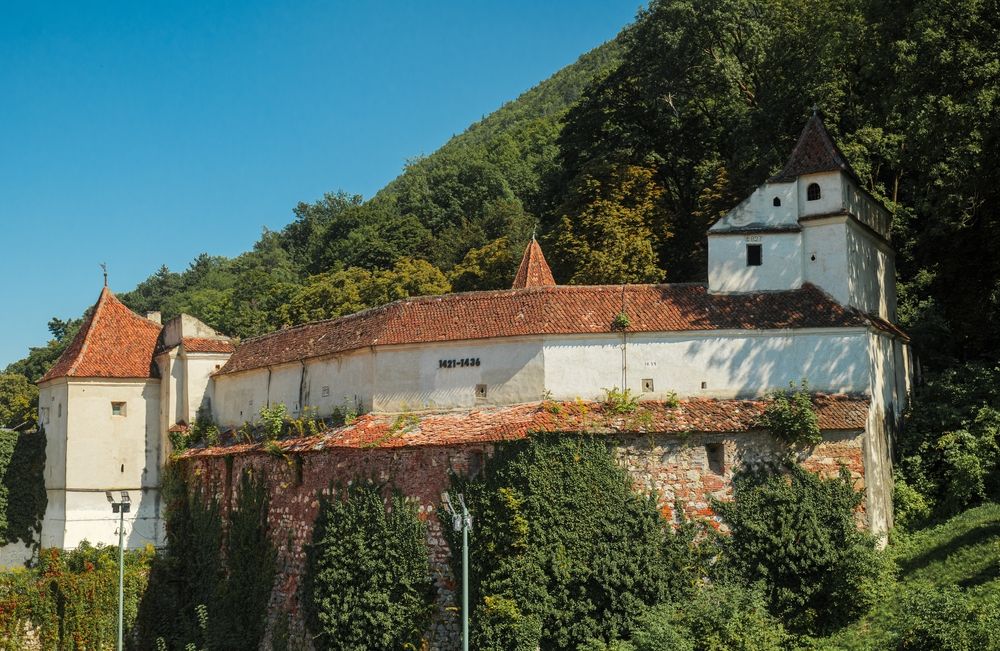 Along the walls, at points considered more defensively fragile, 7 bastions were built, still visible today, each manned by soldiers who sounded the alarm in case of attack. Among the most beautiful bastions are:

– Post-Evarilor (Bastion of Refuge), built between 1450 and 1455.
– Funarilor dates back to 1416.
– The Fierariról (Blacksmith’s Bastion) dates back to 1520.
– Tesatorilor (Weaver’s Bastion), built in two phases between 1421-1436 and 1570-1573, and the City Fortifications Museum attached to it.
– The graft was built between 1515 and 1521 to connect the defenders of the White Tower with the fortress. Inside it, temporary exhibitions and workshops are now organized.

Start at the beautiful Piazza Sfatului, the main square in the heart of the medieval city, built in the 13th century. On this square is the ancient Casa Sfatului, a palace from 1420, topped with the Trumpet Tower, where the city council members gathered, and the Council Palace, which now houses the Brasov Historical Museum. Opposite is the lovely Renaissance Hirscher House, known as the Merchants’ House, built between 1539 and 1545 by order of Apollonia Hirscher, widow of then-mayor Lucas Hirscher.

The house was used by merchants for trading. During the Christmas season, a huge Christmas tree is lit on the square and a beautiful Christmas market is held. 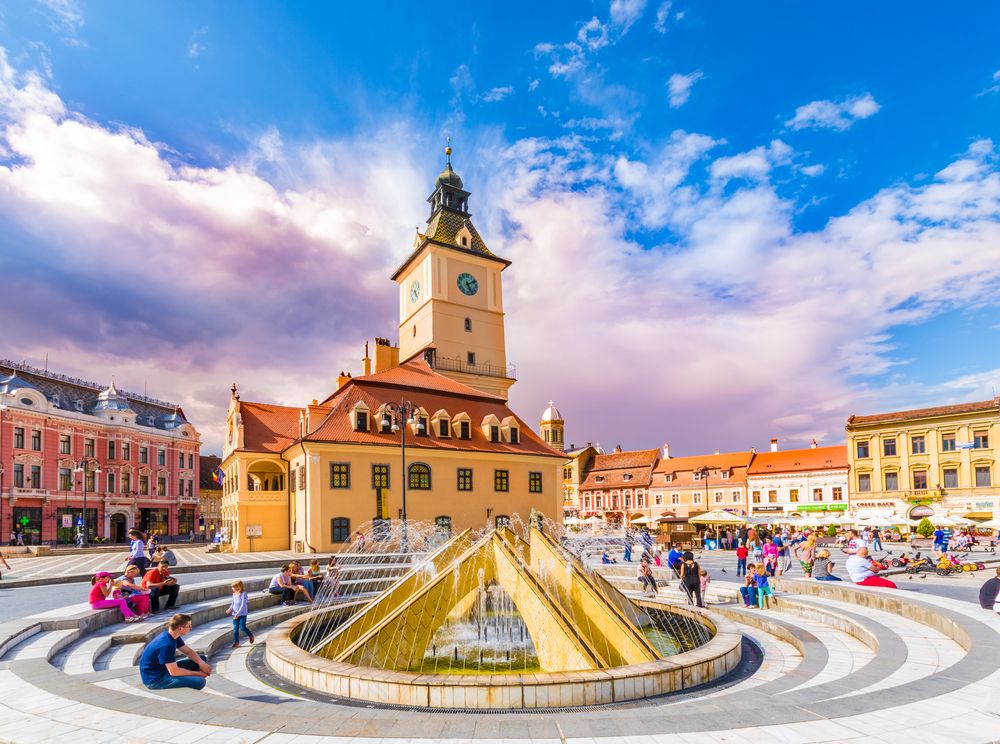 Then continue on to Biserica Năgre, the beautiful Black Church, the largest Gothic church in Romania or rather the largest Gothic church in Eastern Europe! The church, Romania’s most famous symbol and historical monument, was built between 1383 and 1480 and took its name from a fire that broke out in 1689 and turned its outer walls black. Inside there is an organ from 1839, some 4,000 pipes and one of the largest collections of Oriental carpets in Europe. Outside, it boasts a bell tower that houses the largest bronze bell in Romania, weighing 6 tons. The upstairs has a beautiful frescoed clock with various decorations.

The Black Church is the largest church in Brasov

From the Graft Bastion you can reach the White Tower and the Black Tower, two towers that guard the old city on the hill. The White Tower dates from the late 15th century, is about 40 meters high and is located behind the walls, like its twin, to protect the city from enemy attacks. It was connected to the Graft Bastion by a staircase and drawbridge. The tower burned down in a fire in 1689, but it was rebuilt in 1723 and again in 1902. From 2003 to 2005 it underwent a new reconstruction and became a museum, housing a part of the Provincial History Museum collection. 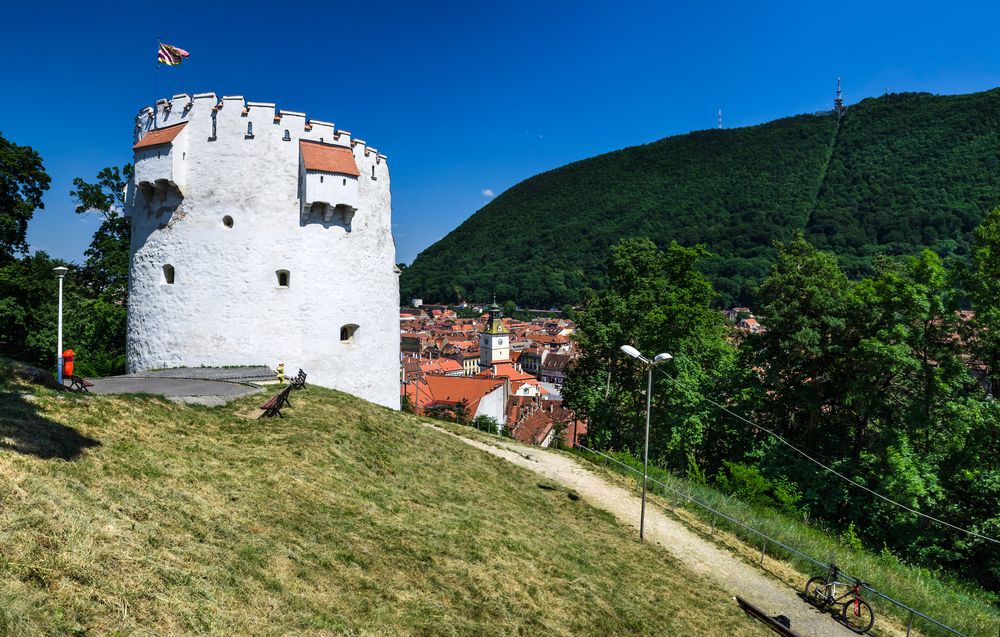 The Black Tower was built together with the city walls. It is located on the rock in front of the Bastion of Fierarilor and served as a defense in case of attack from the outside. The tower is connected to the city by a staircase and is connected to the bastion by an elevating bridge over the River Graft. The Black Tower got its name from a fire caused by lightning in 1559. Since 2001 the tower houses part of the collection of the Provincial Museum of History. Inside you can admire the weapons, armor, and tools used by the inhabitants of that time. 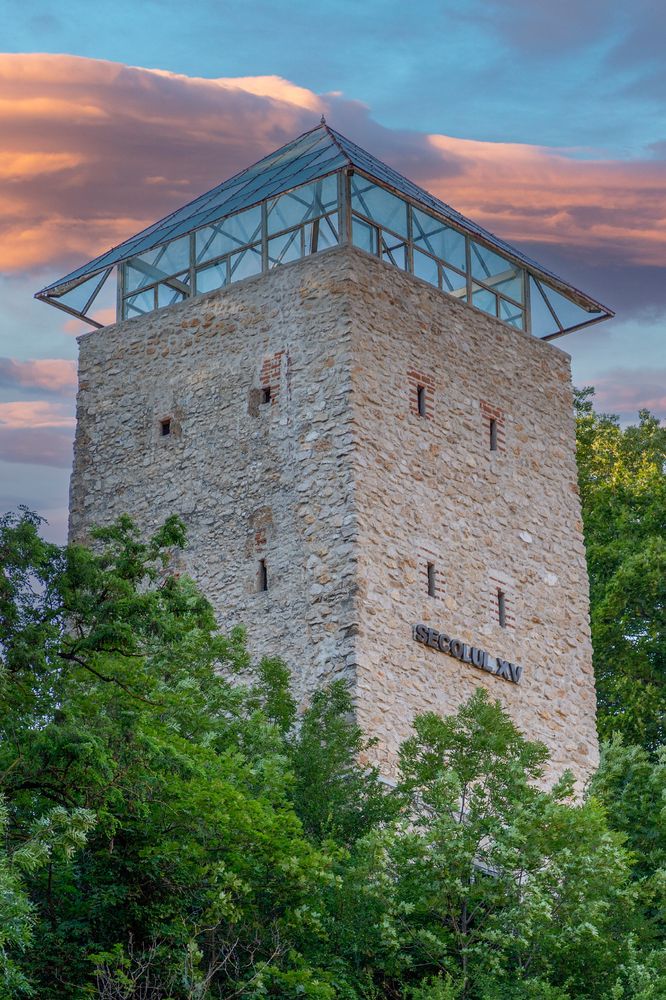 Outside the walls you can visit the district of Šej, the old quarter of the city, where you can find the beautiful Biserica street, the Church of St. Nicholas, which dates back to the 14th century and is located on the Uniria square. Inside the church is the First School of Romneasca, a building from 1495, rebuilt in 1760, the first Romanian language school in the city, which today houses the Schei museum complex. Inside, there are more than 4000 ancient manuscripts and 30000 historical documents and topographic maps.

Around the square there is a pedestrian zone where you can find several pubs, restaurants, clubs, bars, patisseries, stores and one of the narrowest streets in Europe, called Strada Sforii, which is 1.32 meters wide and 83 meters long. A few years ago the firefighters used this road as an access road, and today it connects two roads: Poarta Shea and Strada Cerbului. One of the most important and pedestrian-friendly promenades in Brasov is Republic Street, where you’ll find artisan shops, old fashioned houses, and exclusive boutiques. At the end of the avenue there is a wooden memorial cross dedicated to the victims of the 1989 revolution, whose names are engraved on a stone slab located in the Heroes Cemetery. 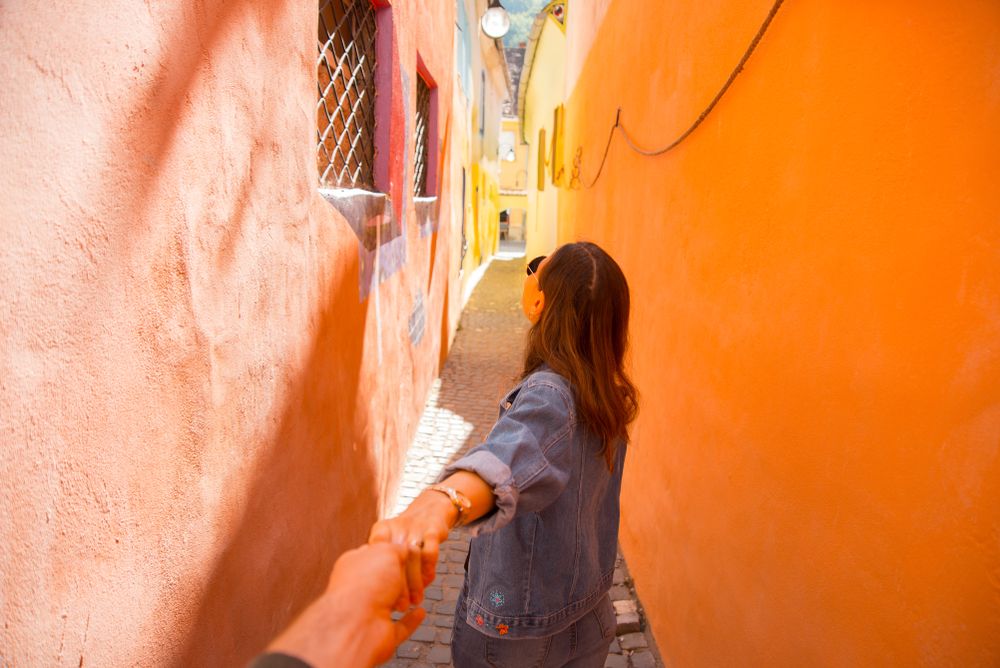 One of the narrowest streets in Europe – Strada Sforii

Enjoy the view from the Citadel of Brasov, a small fortified town perched on a hilltop that can be reached by road in about 20 minutes from the city center. From here you can enjoy the most beautiful views of Brasov, from the new and modern town to the old town.

Panoramic views of the Citadel

If you have time, you can climb Mt. Tampa, home of Hollywood’s BRASOV, thanks to the comfortable cable car (daily from 9.30 to 16.You can get to Fujairah at 00:00 (Monday off) or by an easy trail of about 4 kilometers. At the top of the cable car is a small bar where you can have a hot tea or a snack. After a short snack, you can take the short path that runs behind the sign to the panoramic terrace, from where you can enjoy a beautiful view of the whole of Brasov. Be careful when walking the trail in winter and spring, as it is often covered with snow and ice and becomes really slippery and sometimes dangerous. 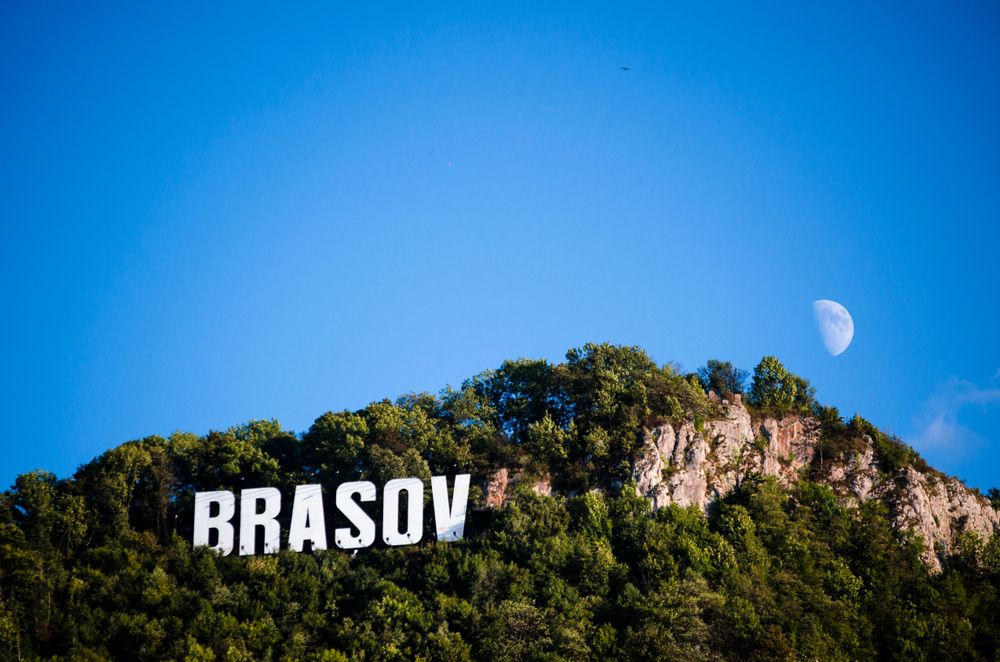